Holy Rood School has been part of the history of Watford for over 120 years.

The school has changed dramatically from its early days at Percy Road to our large building and spacious site now at Greenbank Road. We have moved from being a separate Infants and Junior school to a 3-11 primary school and nursery. We are proud to have served so many families within our community and look forward to continuing to do so for many more years to come! 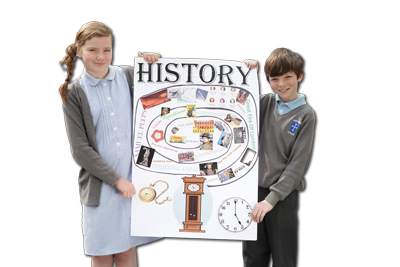 The first Catholic school in Watford opened in 1885 and was called ‘St. Vincent’s School.  It was a board school started by the Dominican sisters in Beechen Grove. In 1893 the school moved to a new building (now Grade II listed) adjacent to Holy Rood church in central Watford. In 1896, the school took on the name of the Church to which it was attached and 'Holy Rood Catholic School' was born!

Holy Rood continued to operate successfully from its Percy Road site until 1969, when a new purpose junior school was opened on the present Greenbank Road site. It was joined a few years later in 1976 by an Infants school on the other side of the car park.

30 years later in 2006, the decision was made to amalgamate the two schools into one large 2 form entry primary school and ‘Holy Rood Catholic Primary School’ came into being.  Over the next five years, a schedule of building works was undertaken to remodel the existing Infant and Junior School buildings and eventually join them to create one school building spanning the joint sites of the original two schools. By 2011, building work was complete and Holy Rood as we now know it was ready to head into the future as one united school and one family.

In September 2016, the school celebrated its 120th birthday with a wonderful Mass of thanksgiving, celebrated by His Eminence Cardinal Vincent Nichols, Archbishop of Westminster. During the Mass, Cardinal Nichols spoke of the proud tradition of Catholic education within the diocese and within Watford itself. He reminded us all of the countless numbers of men and women who have come and gone before us in the service of the Catholic families of the town, and how undeniably proud he thought that they would be with the results of their hard work, dedication, sacrifice and service in helping to create the wonderful school that we are blessed with today.

As part of Home Learning, our pupils have been learning about our school history and the meaning of our school badge. Take a look at some of their work: